● Assessment the vegetation cover and ecosystems on the basis of GIS technologies and remote sensing methods.

● Natural and anthropogenic dynamics of vegetation.

● Mapping of anthropogenic transformation of vegetation.

● Study of botanical diversity on the species, phytocenotic, ecosystem and landscape levels.

Development of methods of restoration of vegetation cover.

Participation in the programme: Botanical diversity of wild relatives of cultured plants of Kazakhstan as the source of enrichment and preservation of genetic pool of agricultural biological diversity for the implementation of the food programme” with the block of objectives: “Phytocenotic Characteristic and Mapping of geographycal distribution and points of seed collection of WRCP (2013-2015): the phytocenotic patters of WRCP of the south east of Kazakhstan have been determined, the maps of seed collection points for 29 floristic districts and distribution areas of the specially important species (pistachio, licorice, Ili barberry and other).

Participation in the programme “Sustained Development of Genetic Resources in State Botanical gardens of the South Eastern and Central Kazakhstan – specially protected natural territories of the republican importance – in conditions of transmission to “green economy” with the number of objectives: “Spontaneous Flora and Vegetation of Main botanical garden” (2015-2017): it has been determined that the layer structure is characteristic for spontaneous vegetation, of which both the natural flora and alien types are floristic elements.

The participation in the complex programme titled “Bioremediation of violated ecosystems in the production of oil in Kyzylorda Province” with the project “Development of Activities for Phytomelioration of Technogenic Oil Contaminated Ecosystems on the Basis of Mapping Models and Experimental Research” (2012-2014): for the oil field of “Akshabulak” 5 maps were developed: actual and potential vegetation; anthropogenic violation of vegetation cover; resistance of vegetation to technogenic factors; activities for the restoration of vegetation cover.

The experiments related to phytomelioration have shown that in the lab condition, the oil contamination of soil reduces germinating capacity by 11-27 % and in field conditions – by 37-100 %. Kochia prostrata is the best phytomeliorant, the introduction of bentonite clay increases germination and establishment of planted vegetation.

The participation in the complex programme “Ecological Assessment of the Condition of Coastal Soils and Waters of Caspian Sea in connection with the oilfield development in the shelf and the development of the method of biological cleaning of coastal zone from oil contamination” with the project “Assessment of Contemporary Condition of the Phytobiota and the Development of Recommendation for the Preservation and the Restoration of Botanical Diversity of the Littoral echotone of the North-Eastern Сaspian Coast” (2015-2017): the littoral echotone consists of 4 blocks and 20 groups of ecosystems – 2 groups of ecosystem of aqualic block, 2 blocks of amphinian block, 11 – fluctuational block; 2 of distant block, 3 groups of anthropogenically altered ecosystems (agroecosystems, technogenic and urbaecosystems).

Implementation of project for grant financing:

"Important plant areas of Kazakhstan (in the limits North Tien Shan piedmont botanical – geographic sub-province as an example)" (2012-2014): 32 IPAs have been identified with the area 13321 hectares, they have been mapped. The IPAs are referred to 4 classes, 14 groups, 20 habitat types, 75 plant communities. There were determined 3 habitats, which are under a threat of extinction: deserted steppes, petrophyte shrubs-, in areas with limestones, the savannoid vegetation. Three IPAs are proposed for inclusion into the Kazakhstan nature reserves network: Arganaty (Alakol Natural Reserve), Ulken Buryltau (Karatau Nature reserve), Tyrnakty (natural reserve and museum of Tanbalytas).

“Sustainable functioning and rehabilitation of the North Aral Region zonal ecosystems in conditions of modern land use" (2015-2017): there have been identified the patterns of natural and anthropogenic dynamic of vegetation. The natural dynamic is determined by endoecogenetic successions, conditioned by life activities of dominant and subdominant species in plant communities and exogenic successions, related to the salinization, soil erosion, topography in sands.

The anthropogenic dynamic is caused by pasture and road digression. The large scale maps have been compiled: of vegetation, of anthropogenic transformation of vegetation, of the functional importance of vegetation cover; of areas of distribution of endemic plants in the North Aral region. It was determined that the moderate degree of desertification is the barrier to negative impact and that it determines the resistance of plants in the event of desertification.

“The properties of area distribution and the restoration of pistachio woodlands of the south of Kazakhstan (2015-2017): the populations of pistachio in the western part of the mountains of the Kyrgyz Alatau and the Syrdarya Karatau on the area of 408 hectares were researched. The database compiled for 36 most valuable forms of pistachio. In the South Kazakhstan province there were founded 3 nurseries of pistachio (Sairam-Ugam National Park). For the first time in Kazakhstan in the farm of “SaryagashZherSiy” there was founded the young watered garden, made of 109 trees, grown in the greenhouse, the seeds were brought from Turkmenistan, Tajikistan, Iran. The map of possible cultivation areas for pistachio was compiled. Recommendations have been prepared for the cultivation of pistachio in Kazakhstan.

The agrotechnics of sowing and planting of the Shrenk spruce in the highland spruce forests of the Zailiysky Alatau are developed. They include the pre-sowing preparation of spruce seeds by the methods of "liquid flotation", stratification or "snowing" for 1-2 months. Then the prepared seeds are sown on the horizontal plots, closing up of sawdust, in penumbra conditions on the northern slopes. The spruce planting should be carried out in the pits. The number of spruce planting was 35%. The number of sown spruce was 17%. However, the spruce sowing in the mountains is more profitable and less time-consuming than the spruce planting.

Implementation of contractual projects. For the assessment of influence of wind energy facilities on the vegetation in the area of Yereimentau (2013) and the Shelek passage (2014): it has been identified that the establishment of wind park does not lead to the substantial transformation of natural environment, violation of the ecosystems will be to the point.

Recommendations have been prepared for the reduction of negative anthropogenic impact on the plant world and the proposal for flora and vegetation monitoring.

Over 5 years more than 140 articles were published (14 in high ranking magazines of Kazakhstan, 6 – in international publication with the impact factor, 120 in Proceedings of international conferences), and the collective monography was published “Transformation of Desert Vegetation of Kazakhstan in regions of Oil and Gas Production and the Possibilities of its Rehabilitation” (2014), the chapters in monographies “Complex Research of Wild Relatives of Cultured Plants of West Tyan Shan (2014), «Novel Measurement and Assessment Tools for Monitoring and Management of Land and Water Resources in Agricultural Landscapes of Central Asia» (Springer, 2014), «Climate Change Impacts on High-Altitude Ecosystems» (Springer, 2015) and participation in publishing the Red Book of Kazakhstan (2014).

There have been developed the inventory type maps: 2 large scale geobotanic maps (of the oil field “Akshabulak,” of the “Tereskent” scientific station and the adjacent territory in the Northern Aral region and 2 medium scale maps of ecosystems (of littoral ecotone of the delta of the Ural river and the adjacent territory, of the Ramsar wetlands of the Syrdarya river delta, and over 20 maps of assessment, recommendation type, including distribution areas of wild relatives of cultured plants, seed collection points, the Impotrant Plant Areas, rare species and communities, etc.

Recommendations were developed: for the restoration of violated vegetation cover in the “Akshabulak” oil field; for the spruce reforestation of the Zailiyskiy Alatau; for the cultivation of pistachio in Kazakhstan; for the sustainable functioning and normative natural resource management in North Aral region; for the preservation and restoration of botanical diversity of littoral ecotone in the North-Eastern Caspian coast. 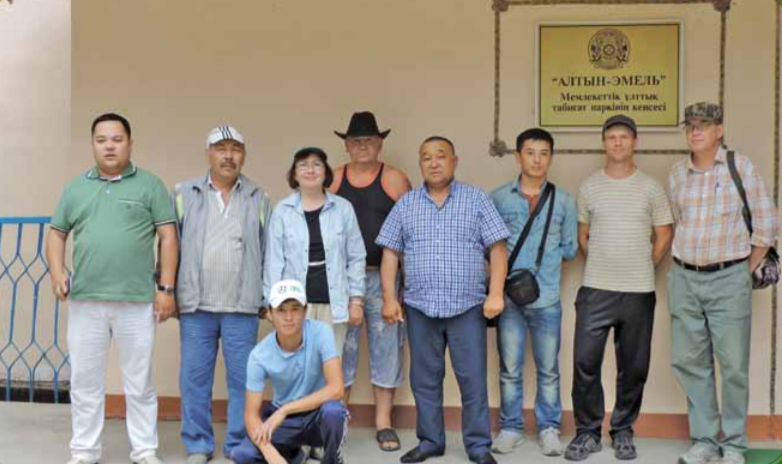 ● Mapping on  a basis of Remote Sensing and GIS technologies.

● Assessment of impact of process of desertification and the global climate change on vegetation cover.

● Performance of ethnobotanic research on the basis of traditional knowledge.

● Establishment and annual replenishment of the Database, integrity of Central Asian Database.

● Evaluation of functional significance of ecosystems with creation of databases and identification of ecosystem services on а basis of mapping for biodiversity conservation and environmental management.